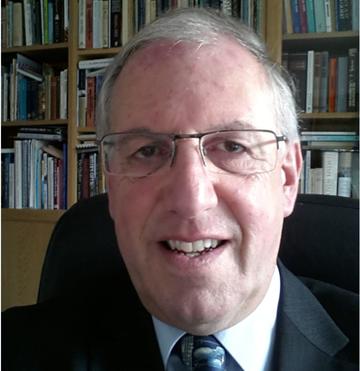 John Dunston is Director of Music and Supernumerary Fellow at Harris Manchester College, and Tutor at the Farmington Institute.

After graduating in Modern Languages from Cambridge, he taught in Germany, where he sang with the Hamburg State Opera Chorus both there and on tour to Israel. He has been the conductor of several choirs since 1979, leading a number of them on tours to Austria, France, Germany (including the former East Germany) and China. Since 2007, he has jointly conducted the choirs of Keble College and the Oxford Jewish Congregation at the annual Holocaust Memorial Day service. In 2017 he conducted four performances of Carl Davis’ work based on the Kindertransport, Last Train to Tomorrow, accompanied by the composer, and directed the directed the choir of Maidenhead Synagogue on the occasion of the visit of the Prime Minister in 2018. He has conducted in York Minster, Gloucester Cathedral, the Royal Albert Hall and the Millennium Dome. As pianist, he accompanied the soprano Charlotte de Rothschild on tour abroad and played as one of the two pianists in performance of Carl Orff’s Carmina Burana in England, Germany and Denmark. He is an arranger of choral music. His set of variations for sixteen hands at two pianos has been performed in both the UK and Brunei. He is a member of the Bach Choir.

John was awarded a Winston Churchill Fellowship in 1991 for a project relating to choral training in China. He is a Liveryman of the Musician’s Company.

John served as Head of two Quaker schools between 1990 and 2010, during which time he led the live broadcast on BBC Radio 4 of Sunday Worship from Leighton Park School in Reading. He has contributed to publications, books and podcasts on a variety of subjects including education, J S Bach, silence and worship, and gave the annual Public Lecture at Ireland Yearly Meeting of Quakers in 2009. He has been Chairman of the Society of Heads and of the Quaker Heads’ Conference, and Chairman of Governors of two independent schools. He acts as Reporting Inspector for the Independent Schools Inspectorate and is regularly invited to lead training, consultancy or inspections of schools in the UK and overseas, assignments in recent years having taken him to Europe, Asia, Africa, Central America and the Middle East.

He is a Fellow of the Royal Society of Arts, an Associate of the Chartered Institute of Linguists, a Governor of Harrow School and Deputy Chairman of the John Lyon School, and Chairman of the Macular Society.