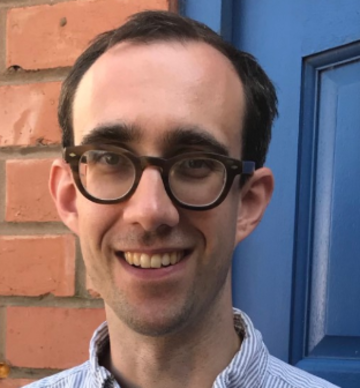 Adam Guy is a Departmental Lecturer in English, and Research Fellow of Harris Manchester College. He is in post during the period of Professor Kate McLoughlin’s Leverhulme Fellowship (2019-22). From mid-2016 to early 2019 he was the Postdoctoral Research Assistant on the Dorothy Richardson Editions Project – a multi-institution collaboration, funded by the AHRC, with the aim of producing scholarly editions of Richardson’s fiction and letters. Adam has also held College Lectureships at St Hilda’s, University, and Wadham Colleges at the University of Oxford.

At Harris Manchester, Adam teaches Prelims Paper 1b (Approaches to Literature), Paper 3 (Literature in English 1830-1910), and Paper 4 (Literature in English 1910-Present), as well as FHS Paper 5 (Literature in English, 1760-1830). His lectures in the English Faculty focus on late modernism and Theory. He has co-convened the Paper 6 option papers for finalists ‘Writers and the Cinema’ (with Professor Laura Marcus) and ‘The Avant-Garde’ (with Dr Rebecca Beasley). At Master’s level he has convened the ‘Material Texts’ B-Course for students on the MSt programmes 1900-Present Day, World Literatures in English, and English and American Studies; he also co-convened the MSt C-Course option ‘Fiction in Britain Since 1945: History, Time and Memory’ with Professor Marina MacKay and Professor Laura Marcus. He has supervised numerous undergraduate and Master’s dissertations on a range of 19th-21st Century writing, theory, and cinema.

To date, Adam’s work has been concentrated in two areas. Firstly, he has written extensively on the survival of innovative prose writing in Britain in the 1950s-70s – a postwar, post-imperial context in which modernism was conventionally seen to have been superseded. His monograph, The nouveau roman and Writing in Britain After Modernism (Oxford: Oxford University Press, 2019), is the primary expression of this research. Relatedly, he has also published articles on the writers Christine Brooke-Rose, B. S. Johnson, and Doris Lessing, and the publisher Calder & Boyars. He is at work on a book chapter about Eva Figes and Eva Tucker, and a journal article about Ann Quin.

Secondly, Adam works on the modernist writer Dorothy Richardson. He has written articles on the French philosopher Gabriel Marcel’s reading of Richardson’s novel-sequence Pilgrimage, on Richardson’s engagement with the cultures of sonic modernity, on the theme/practice of care in Richardson’s writing, on Richardson’s family history, and on the current preparation of scholarly editions of Richardson’s work in the context of what has come to be called the New Modernist Editing. He is a member of the advisory board of the Oxford University Press scholarly editions of Richardson’s fiction and letters – the first volumes of which will be published in 2020. He is also a member of the editorial board of Pilgrimages: The Journal of Dorothy Richardson Studies. You can read about the Knowledge Exchange project he ran on Richardson in Abingdon, the town of her birth, here: https://dorothyrichardsonblog.wordpress.com/2017/09/20/dorothy-richardson-in-abingdon/