137 Years of HMC at Mansfield Road

137 Years of HMC at Mansfield Road

On 18th October, 1893, Manchester College opened it’s Oxford buildings four years after the college had moved from London, having been housed temporarily in what is now the Patisserie Valerie on the High Street. This was the culmination of a series of events set into motion by the Annual Meeting of 1888 where the trustees voted by 42 votes to 36 to move the college from its  near half century stay at University Hall, London. The present day Mansfield Road site was purchased in 1889 from Merton College for the sum of £8,000 (just over £1,000,000 today).

Last Sunday (18th October) marked 137 years since the opening of Manchester College’s Oxford buildings. Many thanks to Sue Killoran for delving into the archive and finding some wonderful primary source material. This article is based off V. D. Davis’ book, A History of Manchester College—From its Foundation in Manchester to its Establishment in Oxford  (London: George Allen & Unwin, 1932) which can be read online via the Unitarian.org.uk website.

The opening ceremony brought together an estimated 700 people, including many prominent members of Oxford University. Owing to the multiple changes in location during the 19th century, the college had friends all over the country and, in order to accommodate as many as possible, several train services were specially commissioned to bring everyone to Oxford in time for the ceremony from both Manchester and London.

This group met in (and presumably spilled out of) the Holywell Music Room and went in procession to the Mansfield Road main entrance in a procession led by the then Principal, James Drummond (Principal of Manchester College, 1885-1906) and former Principal, Dr James Martineau (1869—1885). A gold key (pictured) was presented by the Treasurer, Charles W. Jones, to the President, Henry Russel Greg, who opened the door and led the group into the new college site.

A service of dedication was held in the newly built Chapel, with a sermon by Enfield Dowson, College Secretary for some twenty years. Following this, the President hosted a luncheon at the Randolph Hotel with over 200 guests with copies of the menu still surviving in the Library’s archive. The menu reveals a lavish table spread with a host of dishes including turtle soup to start and at least three main courses, all presented in the pictured Art Nouveau booklet.

In his opening address at the Luncheon, Principal James Drummond spoke of the future of Manchester College and that he hoped the move to Oxford would solidify the presence of the college in mainstream academia. This, in Drummond’s eyes, marked a clear new path for the college—it would no longer be a dissenting institution shunned by its peers but instead amongst equals whilst still upholding Unitarian tradition. It seems quite fitting, therefore, to be celebrating 137 years of exactly that happening. 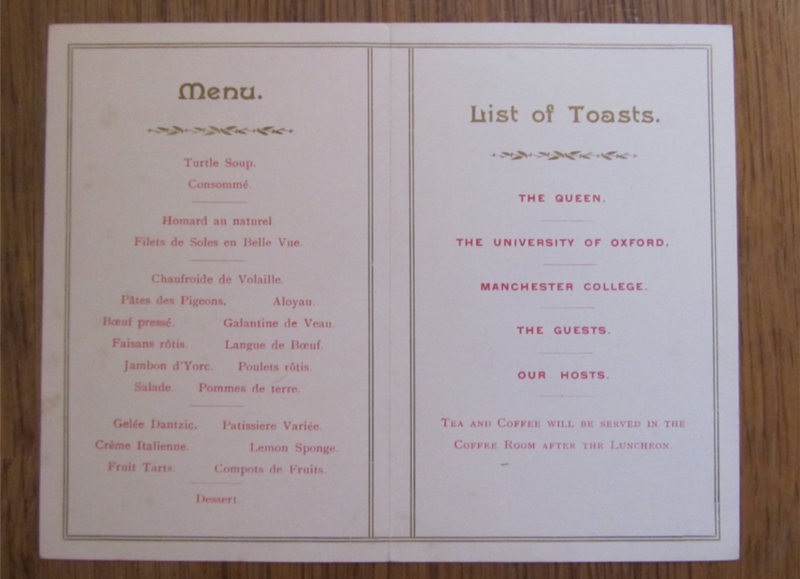