Professor Deavere Smith is an actor, playwright and a Professor at the Tisch School of the Arts, New York University. Although perhaps best known to a worldwide audience for her performance as Dr Nancy McNally in The West Wing, she has received particular acclaim for her playwrighting technique of ‘verbatim theatre’, by which her script (which she often performs in one-woman shows) is drawn from real-life interviews. Among other honours, Professor Deavere Smith has received the Gish Prize, the Jefferson Lectureship, and honorary degrees from colleges and universities across the United States. 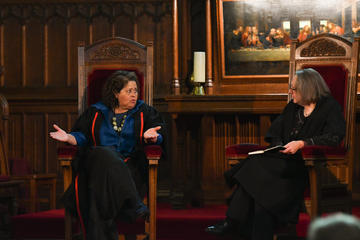 On Monday, Professor Deavere Smith was officially inducted into her Honorary Fellowship in a short ceremony in the College Chapel, before speaking ‘in conversation’ with the Principal about her life in the arts. They were joined by an in-person audience of invited guests, and many more viewing the event via livestream.

On Wednesday, Professor Deavere Smith was admitted to the honorary degree of Doctor of Letters at the University’s Encaenia ceremony. At this special – though much postponed – occasion, the University celebrated the centenary of allowing women to take its degrees in 1920 with an all-female line-up of honorands.

Also honoured at Encaenia was another of our Honorary Fellows, Dame Sally Davies, former Chief Medical Officer of England and now Master of Trinity College Cambridge. The College congratulates both of its honorands, and is proud that they are now honorary graduates of the University as well as Fellows of our fine college!