It is with great sadness that the Principal and Fellows of Harris Manchester College have learnt of the death of William Lacy Swing.

UN Secretary-General Antonio Guterres expressed his sadness over the death of William Swing:

‘A true humanist, Bill Swing dedicated his life to serving the most vulnerable of the vulnerable in our world. I will never forget his dedication and compassion as we worked together side by side in the face of some of the worst displacement crises’.

The College sends its deepest condolences to Mrs Yuen Chong Swing, Ambassador Swing’s children Brian and Gabrielle, to his wider family, and to former colleagues and friends. A tireless advocate on behalf of migrants and refugees, Director-General Swing was interviewed by the BBC in Cox's Bazar, Bangladesh, in Oct 2017, as hundreds of thousands of Rohingya were fleeing across the border from Myanmar. 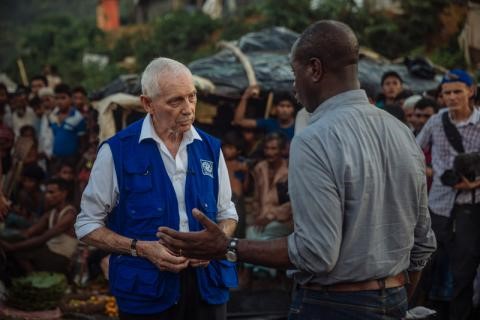