The College’s connection with the Unitarian tradition is widely known and our archives contain important documents and strong collections that attest to this relationship.  Perhaps less celebrated are the Unitarian connections involved in the establishment and development of The Manchester Guardian. In both cases, Cross Street Chapel in Manchester was a key fixture in their stories. 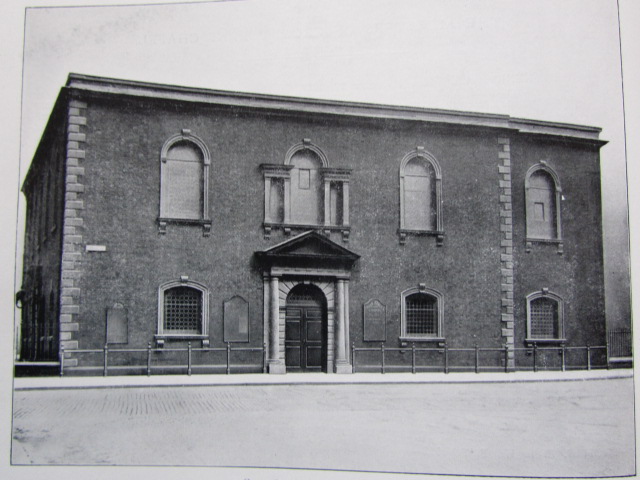 Numerous cultural, educational and civic institutions and initiatives are linked to the Chapel, including the Manchester Academy (now Harris Manchester College, Oxford), The Manchester Guardian, Owens College (now University of Manchester), the Manchester Literary and Philosophical Society, Manchester Royal Infirmary and Manchester Statistical Society to name but a few. The Chapel’s congregation boasted numerous civic leaders of the city, including constables, mayors and parliamentarians.

The Cross Street Chapel building was founded as a Dissenters’ Meeting House and, while it became linked to Unitarianism, it actually set no religious tests for its ministers or congregation. This stance echoed the tolerant and liberal attitude of those who attended the services. The congregation was generally made up of wealthy middle-class textile manufacturers and merchants, who were close socially, often marrying amongst themselves, politically similar, and often involved in the commercial, civic or cultural life of the city. In his book Reform and Respectability, the making of a middle-class liberalism in early nineteenth-century Manchester, Michael J. Turner notes ‘Cross Street provided a political and religious base for Manchester’s respectable reformers. The congregation was cohesive, exclusive and dominated by men of wealth and status who were ready and eager to enter provincial life. ….  Cross Street provided a headquarters and a forum, a launching pad … and a base’ (p 36).

Harris Manchester College was founded in 1786 as the Manchester Academy, one of the last dissenting academies.  Dr Thomas Percival was a Trustee of the Chapel and the first President of the newly formed Academy. The first tutors of the Academy were Reverend Barnes and Reverend Harrison, both of whom were ministers at Cross Street.  The Academy first met in the Chapel before moving to premises purchased with the help of the Chapel Trustees. The Chapel remained an important location in its institutional life, even after the College removed to York in 1803 and to London in 1853, with Committee meetings continuing to be held in the Chapel Room until the College’s relocation to Oxford.

From the Minutes of the first meeting of the Manchester Academy Committee, requesting that an application be made to the Trustees of the Dissenting Chapel for the purchase of a plot of land, 1 March, 1786 (MS M.N.C. Misc 65 Minute Book A, 1786-1810)

Similar levels of interconnection emerge in the story of The Manchester Guardian. John Edward Taylor, founder of the paper, was the son of a Unitarian turned Quaker. He was taught Mathematics by John Dalton who taught at the Manchester Academy.  He attended Cross Street Chapel throughout his life and later became one of its Trustees. When raising funds for The Guardian, seven of the eleven backers were Unitarian and five of those attended the Cross Street Chapel. Taylor worked with Jeremiah Garnett in setting up the paper, a fellow Unitarian and Cross Street Chapel attendee.  John Harland, one of the first reporters employed by the paper, was also a Unitarian as were the Scott family into which both Taylor and his father married.  Both Taylor sons (one an alumnus of Manchester College) continued to be involved in the Chapel after their father’s death.  Indeed, it is surely no mere coincidence that The Guardian’s Manchester offices were, for many years, to be found in Cross Street (1860-1970).

Cross Street Chapel continues to serve as a Unitarian Chapel in Manchester's City Centre although it was rebuilt in the 1950s and again in 1997.  Its present minister, the Rev'd Cody Coyne, trained at Harris Manchester College, signifying the link that continues between both institutions.