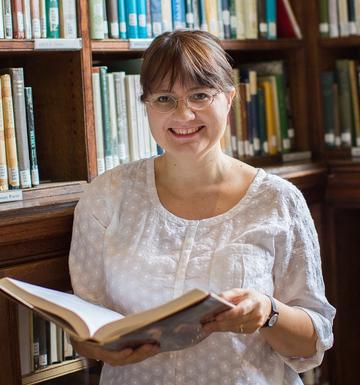 Kate McLoughlin joined Harris Manchester in 2014 from Birkbeck College, University of London, where she was Reader in Modern Literature.  A former government lawyer, she is also an Associate of the Royal College of Music in piano performance and a published poet. Kate is co-Convenor of the Silence Hub (SH), a multi-disciplinary, public-facing network of scholars interested in silence. She is also co-Founder of the War and Representation Network and co-General Editor of Edinburgh University Press’s Critical Studies in War & Culture monograph series.

In 2017-18, Kate co-convened a seminar series funded by the Mellon Foundation, Post-War: Commemoration, Reconstruction, Reconciliation. The Series brought together creative practitioners, academics and figures from the public sector, including the architect Daniel Liebeskind, the novelists Aminatta Forna and Rachel Seiffert, the poets Dunya Mikhail and Jenny Lewis and the composers Jonathan Dove and Errollynn Wallen.

Kate teaches English Literature from the late 18th century to the present and directs the studies of all undergraduates at Harris Manchester reading English and Joint Schools.  She lectures for the English Faculty on a variety of topics within the same period, as well as supervising master’s and doctoral dissertations.

Kate is currently writing a literary history of silence, funded by a Leverhulme Trust Major Research Fellowship, to be published by Oxford University Press. This traces silences and silencings in English Literature from Anglo-Saxon poems about solitude to initiatives to carve out silent spaces in the age of digital notifications. She is also editing an anthology of poetry, Silence Please, for Bodleian Publishing.